Motorcycle Test Reported To Be In Crisis

Now don’t get me wrong, I know there are fewer people 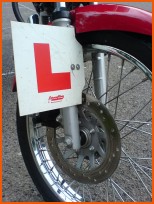 taking their bike test since the new one was bought out but I do have issues with the way this is being reported.  Here is the article as it’s being reported online on the Motorcycle News website.

A crisis hitting the number of people taking the motorcycle test is even deeper than previously feared, latest figures show.

Eighteen months after a new Europe-wide test was introduced, the number of people taking it was still barely half the former level.

When bookings dropped drastically following the changeover last year, the Driving Standards Agency said it was temporary and demand would “settle at usual levels again in 2010/11”.

But new DSA figures point to a long-term decline.

But in the 18 months following the changeover, only 73,508 people completed the new test, 4083 a month and almost half the earlier rate.

The Government is conducting a review of the test, which was originally intended to reach conclusions by autumn.

Roads minister Mike Penning said: “The review of the motorcycle test is a top priority for me because I want to make sure that we have a test which prepares bikers properly for the road.

“We have been working with the motorcycle training industry and others to make sure that we are taking all views into account and we will report on findings as soon as possible.”

My problem is in the way these figures are being presented (sorry MCN).

As a lot of you know, the new test was originally scheduled to start in September 2008 but, because of bungling incompetance, so few of the new test centres were ready for use, the implementation of the test was put back about 6 months.  In the lead up to September 2008 thousands upon thousands of people decided to get their bike licence under the old test regime and so booked lessons and their test.  I should know,  I was one of them!!!  I took one look at the new test and thought “S*d that!!!”

During 2008, riding schools all over the country were inundated with trainees learning to ride, which definately skews the figures somewhat, as in a normal riding year fewer people would be taking their test.  Then the test was put back 6 months so that more of the new test centres could be made ready, and those who thought they had missed the original deadline were given a life line and once again the riding schools were booked solid, even though it was winter

According to the DSA  some 130,498 people took their test in the 18 months leading up to the change of test.  I’m pretty damn certain a sizeable number of those were riders who wanted to take the old style test and not the new one.

Now, since the new test started 18 months ago the DSA say that just 73,508 people have taken it, a drop of almost 50% on the previous figures.

BUT…… Seeing as the figures from September 2007 until April 2009 are hardly indicative of the number of people taking their bike test during a ‘normal’ 16 month period, I don’t see how they can be reliably compared with those from May 2009 up until late 2010.

This entry was posted on Thursday, December 9th, 2010 at 6:47 pm and is filed under 2009 Motorcycle Test Changes/Updates, Ravens Musings. You can follow any responses to this entry through the RSS 2.0 feed. You can leave a response, or trackback from your own site.

One Response to Motorcycle Test Reported To Be In Crisis