I have one of these fitted to my Baby Blade, it’s a must on any bike for me now as it removes all the hassle about remembering to oil your chain away (and the mess too :-))

My O/H bought me mine on my birthday last year and it was fitted the following day and apart from filling up the reservoir every few thousand miles I don’t have to do anything to keep my chain in good nick.  My replacement chain, fitted a few months back, still looks like it was put on yesterday 🙂

He swears by them and has fitted them to every bike he has owned for the last 7 or 8 years, and now I’m a convert and recommend them to everyone as well. 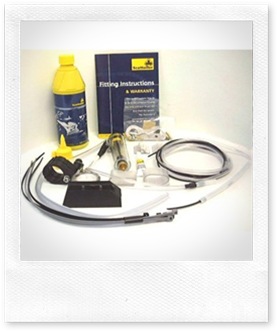 Well, it finally had to happen.. I had to change the tyres on my bike at the weekend.. It wasn’t that the tread was getting low, but because the tyres had squared off 😦

The tyres were on the bike when I bought her, and I have no idea how many miles they had done prior to that, but over the last 16 months I did almost 4700 miles on them, so they have lasted really well 🙂

So I had a pair of Metzeler Roadtec Z6’s fitted at the weekend, £220 fitted at S&M motorcycles in Banbury..

I managed to get out for a short run about town on Saturday, looking for some bolts for my boyfriends Gixxer carbs, to start scrubbing them in, but with him being on call for work wasn’t able to get out yesterday….. And today it’s flipping raining, with rain forecast for most of the rest of this week, by the looks of things 😦

Oh well, maybe I can go out and ride round carefully between the rain showers 🙂