We’ve been in the lucky position where we had exibitor passes as my OH’s bike was in the Custom Xtreme display, and so today we made our second visit to the show.  We still have to go back tomorrow to pick his bike up once the show closes and we’re hoping the worst of the weather is now over and we won’t have any problems.

Firstly, the Streetfighters on the Custom Extreme display.  I gotta do this first or my OH will never forgive me 😉 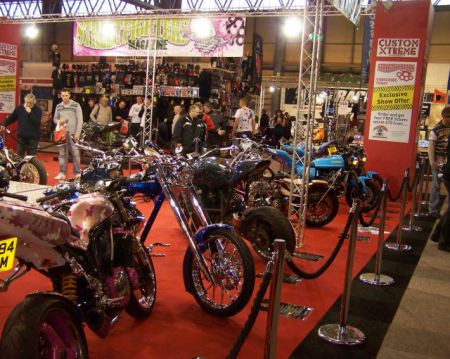 First of all is Sideshow’s ‘Roadkill’.  This was originally a 1996 Honda Fireblade but a few months sawing, welding, painting, ebaying and swearing produced this..  If you want to have a look at the build process you can read ALL about it here.  I just love it but unfortunately I’ll never be able to ride it, not unless I take to carrying a set of steps round with me so I can get on it!

This not so little beaut belongs to Mark (Rouge on Custom Fighters).  The frame was custom made by Mark himself in his shed and the oomph is provided by a GSX1400 engine.  If you want to take a look at the build process you can follow it here and it was featured in Issue 202 of Streetfighter Magazine.  This photo doesn’t really do it justice so I’ll do a little write up on this another time with some nice close up photos 🙂 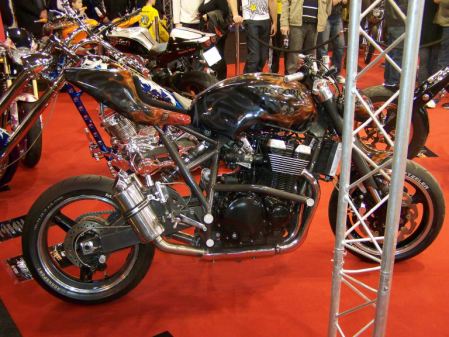 Lastly for today is this one.. A rather tasty Suzuki 7/11 which featured in issue 200 of Streetfighter 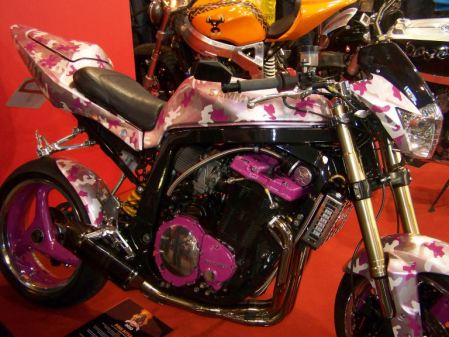