As ya know one of the GREAT things about Motorcycle Live is being able to sit on bikes and try them out for size so I did!!!!!!

Here I am on the Ninja 😀

As you can see I was able to totally flat foot on both sides when sitting on it.  I found it felt quite slim as well!  All well and good when you’re only 5′ 3″ tall!!!

Next up is me on the CBR600.  Sat on this one I was only able to get the balls of both feet on the floor which quite surprised me considering how I felt on the Fireblade!

Here I am on the Fireblade 😀  I was very pleasantly surprised to find that I could get both feet flat on the floor on the Blade.  I wasn’t expecting it to be as small as it is, gawd knows how big blokes manage to ride it comfortable. I felt like it fitted me like a glove!

After the Urban Tiger colour scheme I personally think the HRC colours are the next best.  I just loved that bike and after riding my ’95 Fireblade it felt so tiny.  I may just have to look out for one ina  few years time 😀

The photo which makes me giggle the most is the next one!  I’m only little ( 5′ 3″!!!) and have said for almost 2 years that I’d love a crosser of some sort but being as little as I am I reckon I’ll have a few issues!  Yer I know that riding crossers off road is different than riding on the street but you still have to stop sometime without falling over, and therein lies my problem.  The crossers I saw at the show seemed to have seat heights that were mostly about the level of my waist 😦

Until we found this one 😀

We’ve been in the lucky position where we had exibitor passes as my OH’s bike was in the Custom Xtreme display, and so today we made our second visit to the show.  We still have to go back tomorrow to pick his bike up once the show closes and we’re hoping the worst of the weather is now over and we won’t have any problems.

Firstly, the Streetfighters on the Custom Extreme display.  I gotta do this first or my OH will never forgive me 😉

First of all is Sideshow’s ‘Roadkill’.  This was originally a 1996 Honda Fireblade but a few months sawing, welding, painting, ebaying and swearing produced this..  If you want to have a look at the build process you can read ALL about it here.  I just love it but unfortunately I’ll never be able to ride it, not unless I take to carrying a set of steps round with me so I can get on it! 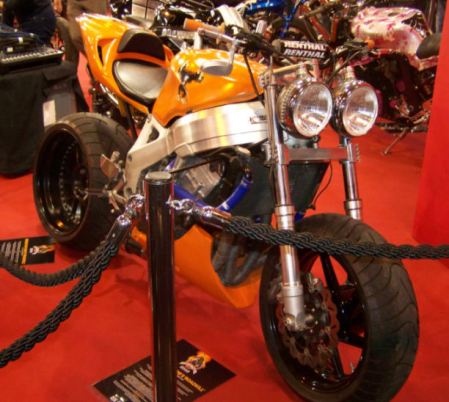 This not so little beaut belongs to Mark (Rouge on Custom Fighters).  The frame was custom made by Mark himself in his shed and the oomph is provided by a GSX1400 engine.  If you want to take a look at the build process you can follow it here and it was featured in Issue 202 of Streetfighter Magazine.  This photo doesn’t really do it justice so I’ll do a little write up on this another time with some nice close up photos 🙂

Lastly for today is this one.. A rather tasty Suzuki 7/11 which featured in issue 200 of Streetfighter

Tis Christmas morning and it’s time to open the Christmas pressies under the tree.. woohoo!!!!

When I turn it over it has this on the back of it..

And I’m sat there thinking “huh??”

My OH then tells me it’s the key to my new bike and my chin hits the floor..

My chin goes through the floor when he explains it belongs to this bike!!!!

Now it takes a lot for me to be speechless (as people who know me will testify to) but this morning I was and still am!  I’m in total shock!  I never thought I would get something like this for Christmas and I can’t believe how lucky I am…

Saying “Thank you”  just doesn’t seem enough when you recieve a gift like this, does it?