Another quick update.. And just in time for Christmas

Click on this image to see the offer catalogue

Police Having To Return Possible Stolen Bikes To Thieves

This is almost enough to make me spit feathers!!

Apparently the police are having to return what they believe are stolen motorcycle parts to the thieves they were seized from because they are unable to find out who the rightful owners were.  According to the Metropolitan Police’s stolen vehicle squad many parts did not have any identifying marks, which if you think about it is the norm for many motorbikes.

Unless we mark practically every part of our motorbikes, how can we prove its ours once its stripped down and the engine and frame numbers are gone?

The parts have to be returned to what the police believe are thieves as they are unable to prove they are stolen.  The Metropolitan Police are urging motorcycle owners to try and put extra identifying marks on their motorcycles in as many places as possible.

Security devices such as Alpha Dot and Datatag are available to help you make your bike more secure.

The Datatag system, available for about £25, includes a small undetectable transponder which you place somewhere IN your motorcycle, in the frame somewhere is usually a good idea, and also includes tamperproof and unremovable stickers, which can be placed on items such as fairings and seats.  Once you register the kit the police can trace you as the rightful owner in the event it is stolen.
Product Information

The Alpha Dot system, costing about £30, works in a similar way.  You are provided with a series of microdot stickers which you apply to various parts of your motorcycle, which when you have registered the product supplies the Police with the actual owners details in the event of recovery after a theft.  The details of the Alpha Dot system are as follows.

Both systems are real easy to fit to your bike and for an out lay of about £30 would definitely prove worthwhile if your bike was returned to you after a theft, plus as a added bonus most insurance companies support the scheme and offer a discount on insurance premiums.

Not only is it a good idea to purchase one for your bike, but it would make a terrific gift idea for a birthday present for other riders you know.

While wandering through Amazon the other day I came across these mugs and absolutely loved them..

Here are just a few, but if you click on the images they will take you to a store where you can find loads more.. 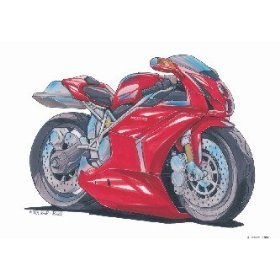